When it comes to cuisine, Chelsea proves it is a small world after all. Neighborhood restaurants specialize in foods from just about every continent. Whether you are hungry for khachapuri or lo mein, moussaka or empanadas, you will find an eatery to satisfy your cravings. 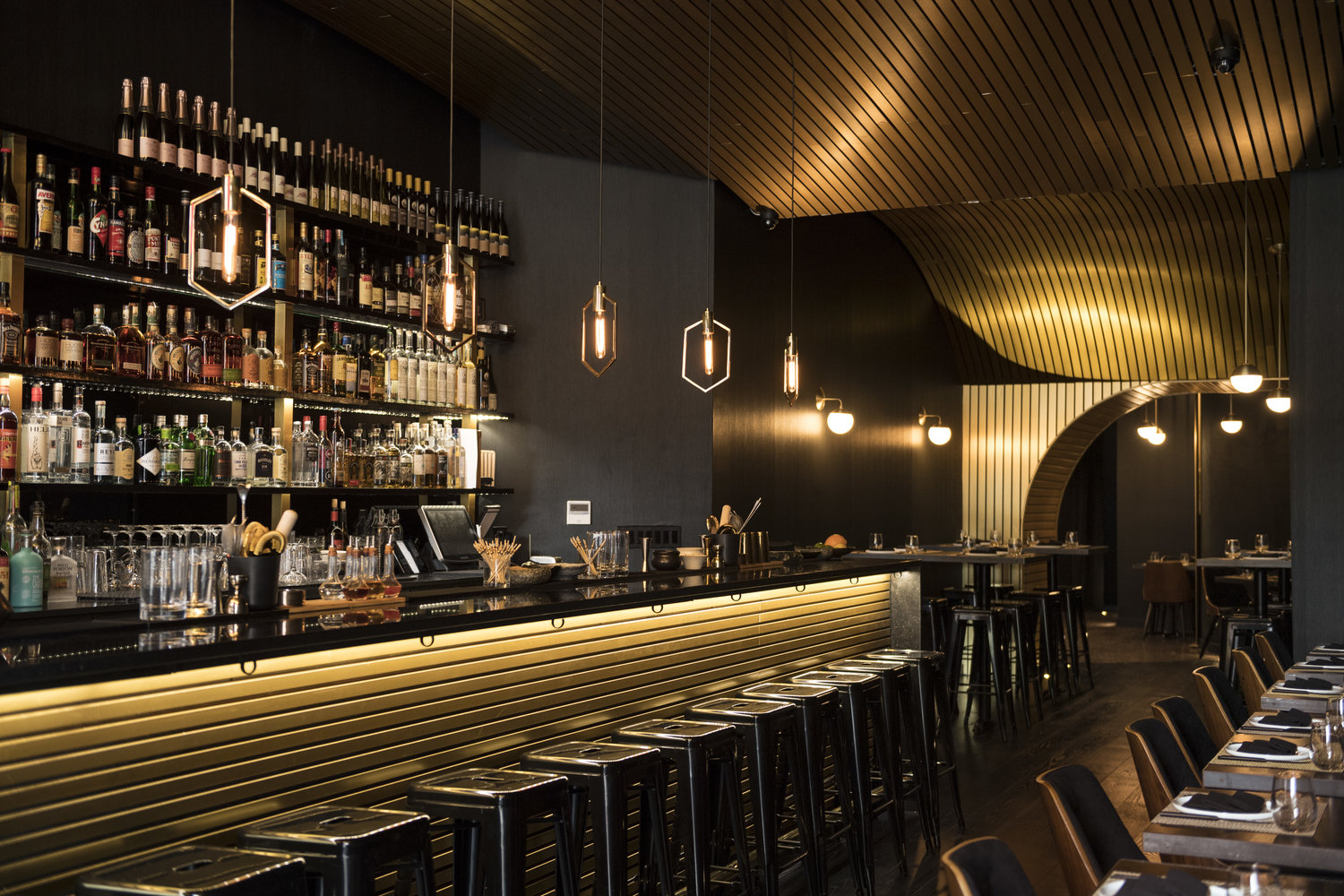 Time-honored Indian flavors are served up with modern panache and a touch of whimsy in a sleekly chic setting. Some starters, such as petite, perfectly spiced chicken fritters, are served on the beds of toy trucks; truffle oil is drizzled atop the kulcha stuffed with green peas. Like most other Indian restaurants, aRoqa is a delight for vegetarians, with dishes including aloo gobi, palak paneer, smoked eggplant with fenugreek-spiced paratha, and a house specialty, a whole okra swathed in spices. Omnivores can select the likes of lamb chop served with traditional mint raita and nontraditional avocado mousse, lamb and shrimp curries, and chicken tikka accompanied by a habanero aioli. ARoqa is a cocktail bar as well as a restaurant, so those who imbibe can try one of the house cocktails such as the Re-engagement (vodka infused with cilantro and pineapple, chartreuse, pistachio orgeat syrup, and lime). 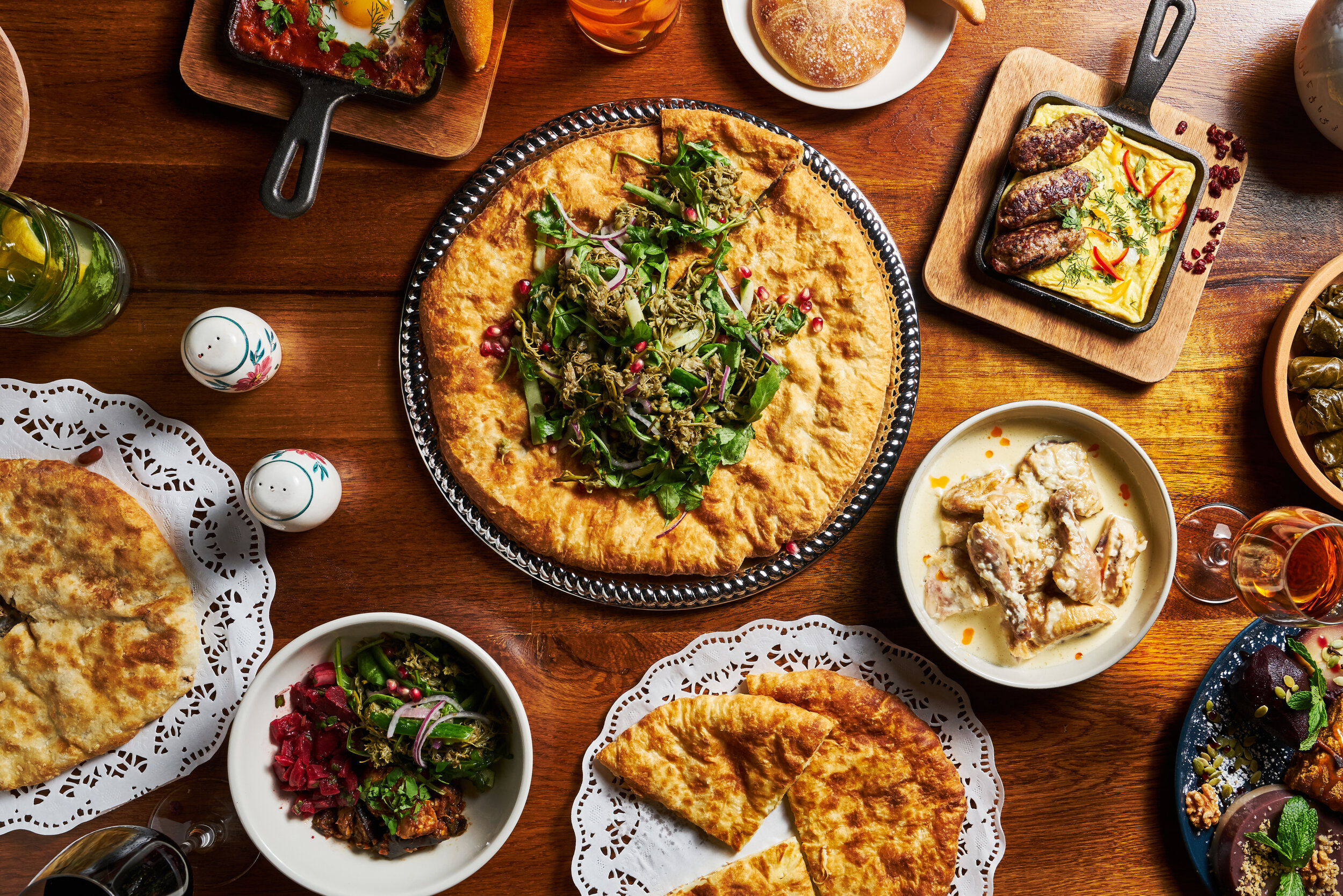 The Georgian cuisine of Chama Mama is not the buttermilk biscuits and peach pie of the Deep South; rather it is the kubdari and ojaxuri of the country that neighbors Russia and Turkey. While sitting among the simple but sophisticated contemporary decor you can indulge in juicy khinkali (dumplings stuffed with meat or mushrooms), shkmeruli (grill Cornish hen slow-cooked in a creamy garlic sauce), and jonjoli salad (made with pickled blossoms of the jonjoli tree). Do not skip the breads, which are key to a traditional Georgian meal. You might find it a challenge, though, choosing among the varieties of cheesy khachapuri, the lobiani, and the beef-and-pork-filled kubdari. Our recommendation: one of each. And of course, you have a broad selection of Georgian wines to accompany your meal.

Like the city in general, Chelsea has no shortage of Italian restaurants. Da Umberto has become something of an institute. It will satisfy both those who grew up with Italian-American favorites and purists who still remember their first spoonful of ribollita while vacationing in Florence. Begin with an antipasto of grilled octopus or mushrooms with polenta crostini and Taleggio cheese; proceed to a classic pasta dish such as truffle ravioli or spaghetti with clams, pancetta, and chiles. Entrees include vegetarian-favorite melanzane (baked eggplant layered with cheese), braised lamb shank with gremolata and polenta, herb-crusted trout, and of course, Florentine steak, here a porterhouse for two. You can also count on a host of seasonal specials each day and a wide choice of Italian wines.

Roberto Santibañez, the chef and owner of Fonda, was born in Mexico City and graduated from Paris’s Le Cordon Bleu, and the restaurant reflects both influences. The guacamole is made to order and served with hand-pressed tortillas as well as chips and spicy pasilla de Oaxaca salsa; the crab croquettes are served with not one but three sauces, including a pickled jalapeño mayo; the ceviche de Atún is made with both ahi tuna and baby shrimp. And those are just a sampling of the starters. Entrees include several enchilada options (a favorite is the chicken topped with stone-ground black mole), grilled skirt steak with a sweet-corn-and-mushroom sauce, and roasted poblano pepper stuffed with sautéed spinach and raisins and topped with roasted-tomato sauce and Cotija cheese. The warm pineapple upside-down cake served with guava sauce is an ideal way to end your meal. 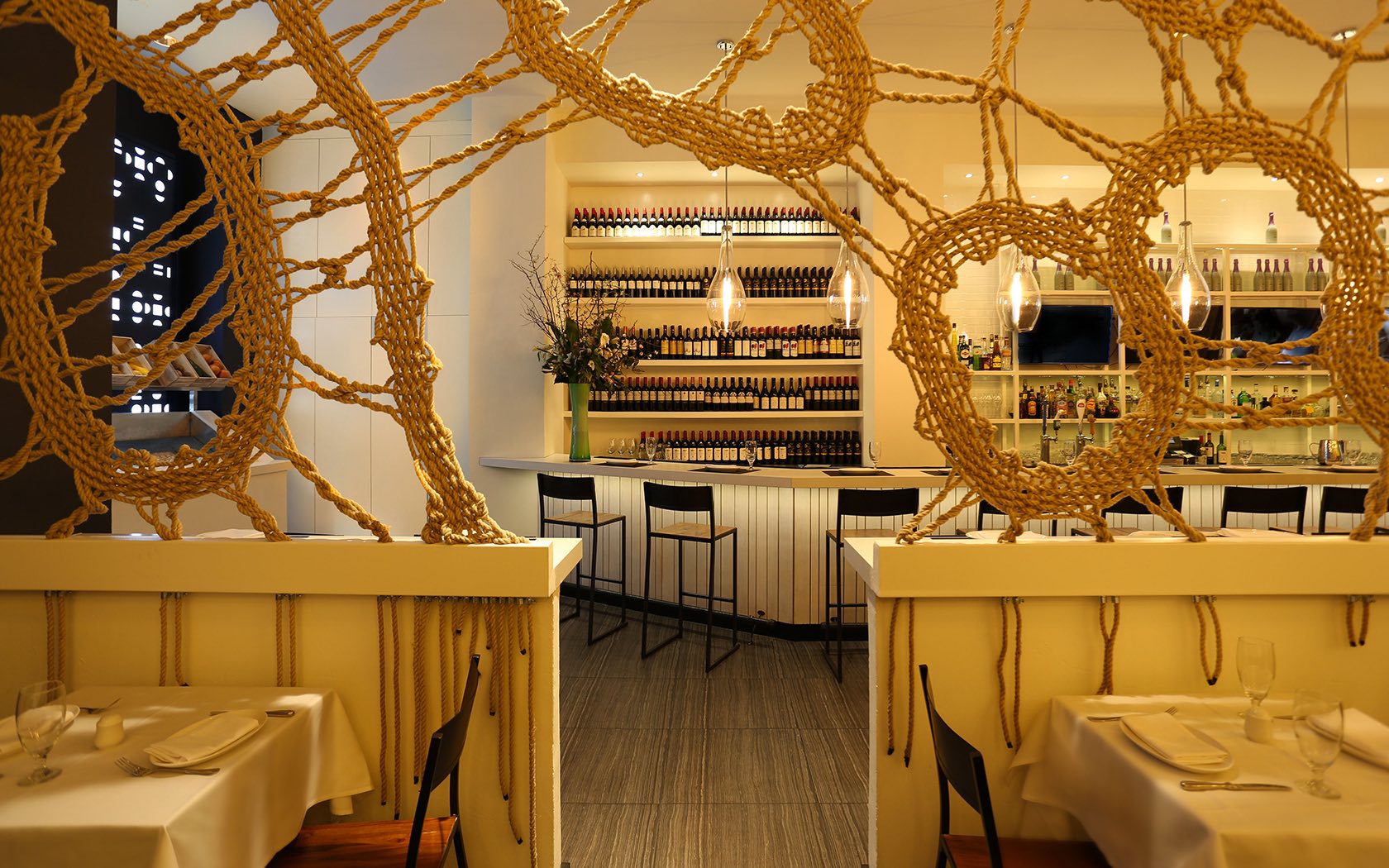 Located atop the Hotel Hayden, Mykonos Bleu offers panoramic views of the Manhattan skyline as well as the flavors of the Greek Isles. All the classics are here: avgolemono (egg-and-lemon soup), stuffed grape leaves, spanakopita, moussaka, grilled halloumi topped with capers and a citrus-mustard vinaigrette. Seafood options abound, including octopus salad with sliced kumquats, seafood orzo, and jumbo tiger shrimp. No matter what you order, a side of roasted lemon potatoes is a must. Those who find it difficult to choose can opt for one of the tasting menus.

Vietnamese cuisine is renowned for its emphasis on fresh ingredients, particularly vegetables and herbs, and a minimum of fuss to distract from the flavors. Omai takes that philosophy to heart. Even its decor is simple, with a minimum of artwork and accent pieces. Translucent rolls are filled with grilled prawns and cucumber or lemongrass beef; noodle soups include pho bo and bun ca, here made with pan-seared tilapia; salads such as goi du du, in which slices of green papaya are topped with shrimp, dried beef, peanuts, and herbs, provide the balance of yin and yang that is integral to Vietnamese dishes. And let’s not forget the entrees, which include roasted duck with a lime-ginger dipping sauce, sautéed sirloin with string beans and yams in garlicky sate sauce, and ginger chicken, rice, and shiitakes and other vegetables baked in a clay pot. Just be certain to leave room for the cake made with three types of chocolate and lavished with caramelized orange sauce.

Given that it is a marriage of Mediterranean and Native American flavors and textures, Argentine cuisine should be wildly popular. Yet here in New York it tends to be overshadowed by Mexican and Brazilian cuisine. Porteño is out to rectify that. Start with a cheese and cured-meat plate, served with nuts and a preserve of white Torrontés grapes, and a bottle of Argentine wine for the table, then proceed to an appetizer such as grilled vegetables accompanied by goat cheese and a balsamic vinaigrette or sautéed blood sausage atop polenta with pesto olive oil. A number of dishes, including the pan-seared cod with sautéed quinoa, lentils, and red peppers and the Malbec-braised short rib with corn cake, are gluten-free. Argentina is known for its beef, and the grilled skirt steak with chimichurri sauce and the pastel de papas (the Argentinean version of cottage pie, with ground beef, olives, peppers, onions, and hard-boiled eggs beneath a Parmesan-accented potato gratin) make the most of that ingredient. End your meal with avocado flan or warm bread pudding served with dulce de leche gelato.

While you can order à la carte at SushiNao, you will probably want to opt for one of its four tasting menus, which range from 7 to 15 dishes. Some of the selections change depending on the season and what looks best at the market, but you can be sure of starting with edamame and miso soup. Yellowtail, salmon, and flounder sushi are common to all tasting menus; the more extensive menus include a black-cod hand roll, kampachi sushi in white soy, garlic, and ginger sauce, and zuke toro (fatty tuna cured with soy sauce). Wine and beer are available as well as a diverse menu of sakes. Many of the seats look out onto a rock garden, which adds to the low-key, restful ambience. 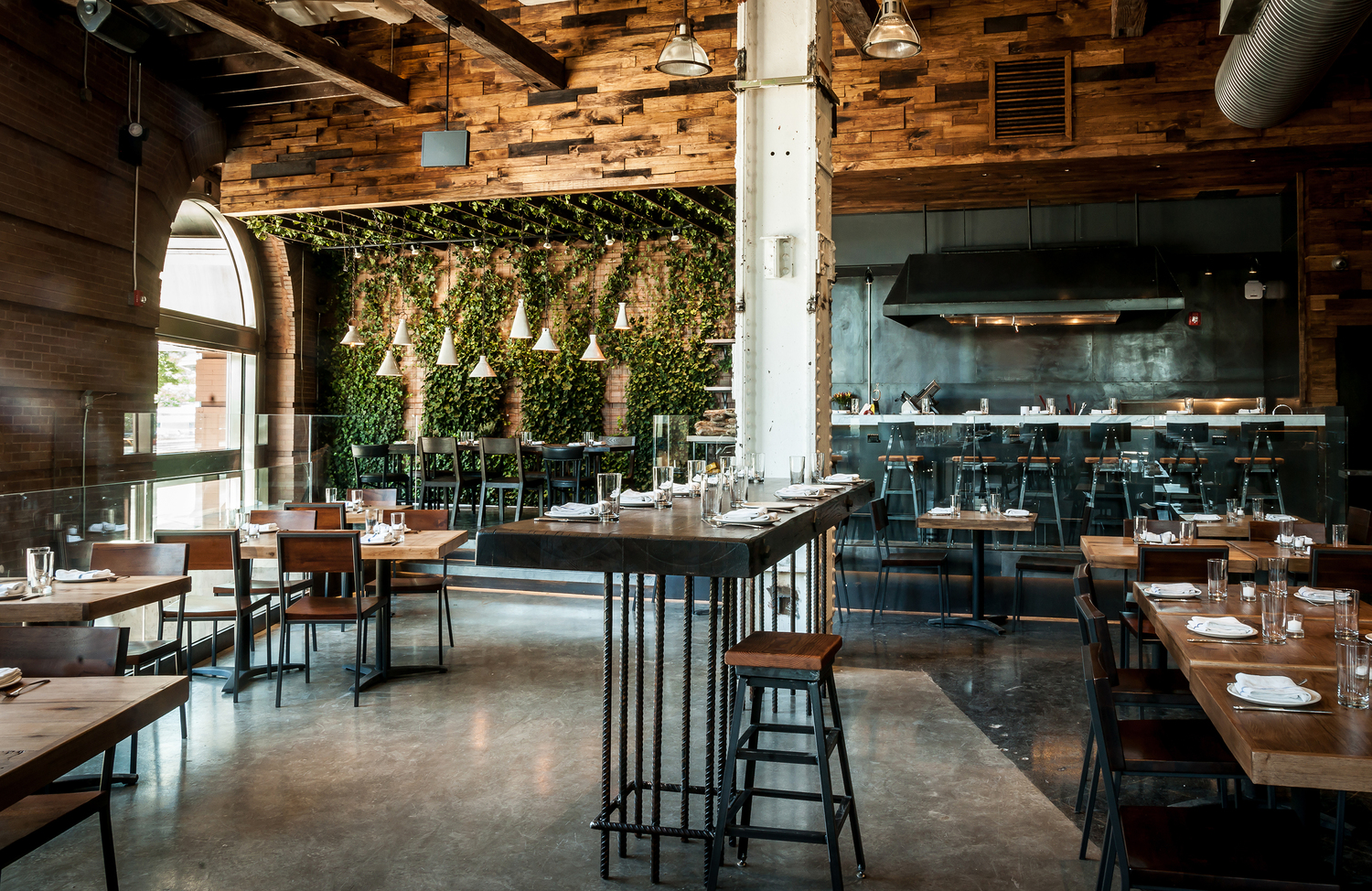 In a neighborhood blessed with a bounty of Spanish restaurants, Toro—headed by two James Beard Award-winning chefs—is among the most popular. Barcelona-style tapas are the specialty, and the variety is dizzying. Among the numerous vegetarian options are tortilla Española, an egg, potato, and onion omelet with kale and aioli; burrata with blood oranges, pistachios, avocado, guajillo chile, and migas; and spiced grilled corn with lime and cheese. Pescatarians can savor the grilled sandwich of sea urchin and miso butter, the fried shrimp toast with chiles and sweet-and-sour sauce, and the hamachi crudo with Basque cider mousseline, russet apples, and kohlrabi salsa verde. And omnivores will delight in the spiced-rabbit empanada, the grilled Iberian pork with Asian pear, and the wealth of jamóns. A pitcher of sangria is practically de rigueur, but feel free to also try one of the house cocktails such as the Green Dragon, a lively mix of mezcal, chartreuse, Luxardo, smoked rosemary, and lime.

The original Shorty Tang opened his first restaurant, the fabled (and still open) Hwa Yuan, in Chinatown in 1968. This eatery, launched by one of his grandsons, brings the same recipes to Chelsea. The cold sesame noodles are said to be among the city’s, if not the country’s, best. Other noodle dishes include braised-beef noodle soup, creamy paitan ramen, wonton soup, and seafood lo mein. There is plenty more to choose from besides noodles: pan-fried or steamed turnip cakes, steamed pork buns, scallion pancakes, steamed sticky rice with short ribs or beef, seaweed salad, stir-fried shrimp with fresh garlic… In short, there is something for everyone.